The Toy sheltie club of america 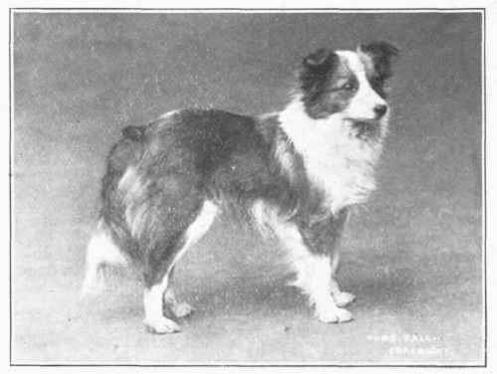 The History of the Shetland Sheepdog

Origin of the Shetland Sheepdog

The Shetland Sheepdog boasts a historical backdrop spanning more than 150 years (Gwynne-Jones, 1958). Originating from the Shetland Isles of Orkneys off the coast of Scotland, documentation of the breed was proven as early as 1840 when an engraving of Shetland’s capital city of Lerwick depicted a Sheltie, a small dog with a longer back than is seen today standing in the background (Gwynne-Jones, 1958, p. 6; Osborne, 1959, p. 17; Coleman, 1943, p. 12). It is arguable that the Sheltie originated as both a companion dog and its sole purpose as a companion was to accompany its family along with being a reliable herding dog for the local Shetland Shepard (Osborne, 1959). According to a visitor to the Shetland Isles who later wrote an article about his travels, “little dogs living in the houses as companions” along with Dr. Bowie, an old Lerwick Sheltie authority claimed, “there were no large-sized dogs in the Shetland Islands before 1850” in support of the argument that Shelties were originally small, companion sized dogs (Gwynne-Jones, 1958, p. 6; Coleman, 1943, p. 19).  However, it is important to note that a larger breed, the Collie began to replace the smaller Shelties as the crofts of Lerwick transitioned to larger sheep farms, which created the need for farmers to turn to a more robust dog that could herd larger herds (Gwynne-Jones, 1958).

Although the Shetland Sheepdog’s ancestors are somewhat challenging to trace, credible accounts have been offered attached to relevant theories supported by a strong factual basis over the years (Coleman, 1943; Gwynne-Jones, 1958, Loggie, 1910; Osborne, 1959). According to James Loggie (1910), a Lerwick, Shetland Isles pioneer in Shetland Sheepdog breeding, and Gwynne-Jones (1958), many of the early Shetland Sheepdogs were Pomeranian in type and some were larger than others (Gwynne-Jones, 1958; Coleman, 1943, p. 17). One theory towards explaining the variances in breed characteristics is that Scandinavian fisherman brought their Sheltie-like-dogs to the Shetland Isles and crossed them with King Charles Spaniels, while another theory rests on the Sheltie having been crossed with a Greenland dog called a Yakki (Coleman, 1943; Loggie, 1910). “Size would speedily by reduced again by the hardship of the life and upbringing and to a certain extent, possibly by a degree of inbreeding, probably involuntary caused by an insufficient number of dogs in the area” (Osborne, 1959, p. 16). Regardless of their biological lineage, “realize that these were the ancestors of the present-day beautiful dog… some were very attractive, but they were very small (they would be classed nowadays as Toys) and were of all colours” (Gwynne-Jones, 1958, p. 5, para. 2).

Because the Shetland climate was bleak and the terrain was rocky as opposed to the lush, green pastures of Scotland, the Sheltie adapted accordingly by “the dog of those days being roughly the same type as a miniature Collie but with several differences, notably the ears which were large and set very close together” Gwynne-Jones, 1959, p. 5, para. 3). Additionally, according to Loggie (1910):

The Sheltie had made its mark as a companion dog and as a working dog on the Shetland Isles, but the breed was virtually non-existent on the mainland of Scotland before 1906 (Coleman, 1943; Gwynne-Jones, 1958; Osborne, 1959). In 1906, the first Shelties were shown at Cruft’s Dog Show in Scotland. Regardless of the fact that no breed-standard had been established by that time, the Sheltie became somewhat of a sensation and the Shetland Collie Club was founded in Lerwick, Shetland in 1908 because Shelties had been shown in dogs shows there since 1896 (Gwynne-Jones, 1958). The Club drafted the first breed standard, which stated, “the type and points of the Shetland Collie shall be similar to the Rough Collie in miniature” (Gwynne-Jones, 1958, p. 7; Osborne, 1959). Further, in 1909, the Club added to their breed standard and included “the general appearance as that of an ordinary Collie in miniature, in height about 12 inches and weight from 10-14 lbs.” (Gwynne-Jones, 1958, p. 7; Osborne, 1959).

In another great effort to further the breed, the English Shetland Sheepdog Club was formed in 1914 in Birmingham, England (Gwynne-Jones, 1958; Osborne, 1959). Because of the Sheltie’s region-wide success, the English sought to create their own breed standard that captured the essence of the original Lerwick-Sheltie breed: “the general appearance of the Shetland Collie as approximately that of a show Collie in miniature, ideal height of 12 inches…” (Gwynne-Jones, 1958, p. 9). The English highlighted a conflict that is still widely debated today between those who desire for the Sheltie “ideal height” to resemble the show-version of the breed versus the companion size “ideal height” Shelties, which were originally under 12 inches in height and weighed six to 10 lbs. (Loggie, 1910).

Historical Foundation and Relevancy for Breeding to Type

According the American Kennel Club (2013), “the Shetland Sheepdog should stand between 13 and 16 inches at the shoulder” (para. 2). Noticeably, this modern-type height is inherently different and inconsistent in historical context of original Sheltie Pioneer James Loggie’s Lerwick, Shetland breed standard, the 1906 Shetland Collie Club, the 1908 Scotland Shetland Collie Club, and the 1914 English Shetland Collie Club’s breed standards pursuant to height. All of the latter clearly stated in their breed standards unanimously over time that the original ideal height of a Sheltie as of 1914 was 12 inches at the shoulder (Gwynne-Jones, 1958). In stark contrast to the American Kennel Club’s 2013 standard, interestingly, “Miniature Sheltie” or “Toy Sheltie” breeders grounded the Miniature Sheltie Breed Standard deep and solidly within the historical roots of the original Lerwick Sheltie of more than 150 years ago. That is, by ideally breeding dogs 12 inches in height at the shoulder, which is not only arguably consistent with the historical context of the origins of the Sheltie breed itself as a companion dog or as a herder for rocky, foliage-less terrain, as originally purported by more than one credible source, but the Miniature Sheltie Breed Standard is also is validated in the confirmation and innate biology of the original dogs themselves.

“We must never forget that one of the charms of the Sheltie lies in its small size” (Gwynne-Jones, 1958, p. 63). Further Gwynne-Jones (1958) argued, “a dog which can be picked up and carried has a great advantage over its large cousin, the Collie…If the upward trend of size is carried too far, we get a dog which is neither Collie or Sheltie but an unpleasing mixture of the two ” (p. 63). Additionally, it is critical to note that towards the middle of the Twentieth Century, the breed standard was amended another time to reflect an ideal height of 14 inches at the shoulder. Yet again, in stark contrast to the original breed standard set forth by the pioneers of this merely 150 year old breed, now exceeding two inches beyond the original ideal presented challenges for some reputable Sheltie breeders in the show ring (Gwynne-Jones, 1958, p. 62). “It is easy to breed a good big one but very difficult to breed a first-class Sheltie of 14 inches or thereabouts” (Gwynne-Jones, 1958, p. 63).

The argument that modern-day Shelties and/or Miniature Shelties are too small, too tall, or otherwise for the show-ring, as a companion, or as a herding dog is punitive and speculative at best and is staunchly refuted and unsubstantiated by both the scientific and historical data of the breed; therefore, such an argument remains biased, subjective, and completely presumptuous when posited by individuals whose mere opinions without substantial valid and reliable weight or merit come into play. In closing, it is important to remember in historical context that “at one time the smaller dogs were not so good in type, but this cannot be said today and there are many dogs of the ideal size or thereabouts which are quite as good as their larger brothers” (Gwynne-Jones, 1958, p. 63).

Gwynne-Jones, O. (1958). The Shetland Sheepdog handbook: Giving the origin and history of the breed, its show career, its points and breeding. London: Love & Malcomson, LTD.

Scottish Shetland Collie Club (1909) "height about 12 inches and weight from 10 to 14 pounds" but seems to have been interpreted as a 12 inch maximum height.

English Shetland Sheepdog Club (1923) From 12 to 15 inches, the ideal being halfway.

Reading this information you can see the tiny size of our shelties is not unusual, perhaps we should have called them 'Foundation Shetland Sheepdogs' instead of Toy Shelties, either way, one can see the size of our dogs has a long history within the breed. The larger shelties are a relatively new change.